Before comparing the Amateur Architecture Studio’s approach to heritage in their Ningbo History Museum (2008) to that of Chaoyangmen Soho’s reinvented mall-yards, we might pull up a stool under a pomegranate tree, and pause to reflect on the nature of the urban village culture, and what it might mean to “keep it alive”.

He Shuzhong describes the hutong way of life as the one thing that best represents ancient Chinese culture, and sociologist Qing Qing Yang suggests that “the Hutongs themselves are a live archive of history”. The term ‘hutong’ refers specifically to a laneway, connecting the living compounds of houses (generally belonging to one family) and courtyards (often shared by several families whose houses face onto the courtyard). More broadly, the hutong area refers to all three elements (the lane, houses, courtyards). The use of the term hutong to describe a residential area had become widespread in China by the time of the Yuan dynasty (from 1271 onwards).

“If you go and look around these formal courtyards you will find most of them have men dun, which tell the visitors information about the household. For example, a box shaped men dun means that the master of the family is a civil official; while if it is a drum shaped round men dun, then the master of the family is a military officer. If there is a lion on the men dun, then the master of this family must be related to royal kinship. If the lion is in a standing posture, then this family has a higher social status, while if it bends over, then it means it is from a relatively lower social level”.

Qing Qing Yang explains that when people chose a marriage partner, the traditional standard men dang hu dui (????) applied, which meant the gate of the two families, which shows the family status, should match each other. While men dun and many other features of hutong buildings have become redundant in a literal sense, they are still highly valued by residents, for the histories and memories they evoke.

Yang suggests that the hutong, the courtyard and the house are all experienced as aspects of home, rather than separate spaces. Hutong were originally only wide enough for pedestrians and bicycles, and so provided “a haven for kids to play in without fear of an accident”. Lu Jian, who often stayed in her grandparent’s (Tianjin) courtyard house concurs that the freedom of the hutongs was one of the pleasures of childhood. 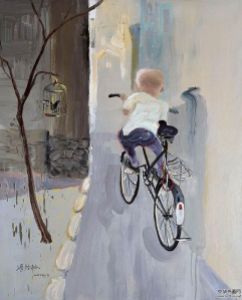 The home-courtyard-hutong space was shared among inter-generational family and neighbours. Yang gives the example of the pomegranate tree grown on a trellis across a hutong. The shade of the tree provides a meeting place where neighbours pull up stools to sit and talk and ? as can often be seen in the Beijing hutong? play mahjong. Shared outside washrooms also provide an opportunity for togetherness, and Yang suggests that the residents wearing of sleeping clothes in the street shows their feeling of home includes the hutong. Lu Jian recalls the sharing of food among the different families who ate together in her grandma’s courtyard; if someone went to the market and got fresh fish, crabs, or shrimp, then they would be shared with the neighbours. 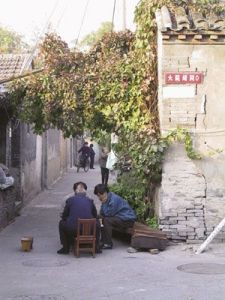 “Communality” and an extended sense of being at home were and are pleasures of the hutong. On the other hand, conflicts among neighbours could sour things, especially as the home-courtyard-hutong life provides for little privacy and escape. Moreover, as Jonah Kessel suggests, the hutong’s living conditions were often poor: space was cramped, buildings suffered from crumbling bricks and leaking roofs, residents relied on coal for winter warmth and had to venture outside to the communal washrooms.

While preservationists would like to see heritage areas (say, within Beijing’s 2nd ring) authentically maintained and restored, it isn’t clear that residents are adverse to modification (and downright fakery) if it enables the preservation of material memories (everything has a story behind it), and continuity of the positive aspects of the hutong way of life. Many former inhabitants have moved to high rise apartments where they appreciate the better facilities (especially the privacy of one’s own washroom) but still long for the tree-lined hutongs, courtyards, and collective way of life. Often a compromise is preferred; residents would like to stay, but have their facilities improved. That may require difficult choices ? if having a washroom installed means losing a sleeping space, which relation needs to go?

Much of the compromising done in still existing hutong areas has been with tourism. To the extent that this enables a continuation of a hutong way of life, compromisers may be content to have come part of a “living museum” (as Yang describes it). However, over-commercialisation in some areas has pushed the compromise too far for the maintenance of the social lifeworld of the hutong. In such cases Yang suggests that these hutong have become an “empty shell”.

How then, might displaced hutong residents view the Chaoyangmen Soho mall? Despite RIBA’s claims that it’s public spaces represent a generous democratisation of Hadid-Zaha’s work, and the architect’s own claims of seamless cultural reinvention, its doubtful the displaced compromisers regard the mall-yards as providing for the continuation of “lived traditions”. It seems more likely they share the preservationists’ view that the Soho represents a kind of luxury-brand gravestone for the hutong way of life. If so, we might (in part three) ask, does Amateur Architecture’s more historical approach better support socio-cultural continuity and, if so, for who?