Welcome, this week’s lecture will look at: 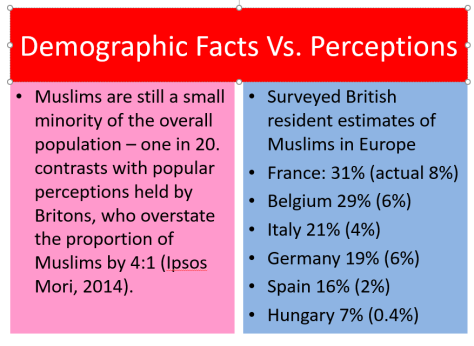 IPSO MORI cited in The Guardian, Today’s Key Fact: you are probably wrong about almost everything, 29 October, 2014

Origins of Muslim people in Europe

Article 1. France shall be an indivisible, secular, democratic and social Republic. It shall ensure the equality of all citizens before the law, without distinction of origin, race or religion. It shall respect all beliefs. Constitution of France (1958)

… the proclaimed universalism of republican values, and in particular laïcité, can very quickly resemble the ‘civilizing mission’ of colonialism. … if Muslims want to be ‘French’, they must learn to be citizens of the Republic first and Muslims second; for many this is an impossible task. Hussey, 2014, 9.

Our former immigrants were Europeans; these are not.  Arab girls who insist on wearing chuddars (chador, veil or covering) in our schools are not French and don’t want to be…Europe’s past was white and Judaeo Christian.  The future is not.  I doubt that our very old institutions and structures will be able to stand the pressure (Dominique Moisi, in Judith Miller, 1991, p.86)

‘Conspicuous’  religious items may not be worn in schools.  Forbidden items include: the Muslim headscarf, Sikh turbans, Jewish  skullcaps and large Christian crucifixes.

Burqa and Niqab banned in public 2011

30 French mayors ban the use of Burkini; municipal police can stop and fine any women in full-body swimsuits at the beach

More than 20 mayors have defied the state council ruling that the burkini bans are a “serious and manifestly illegal violation of fundamental freedoms”.

Laïcité and the bans; “protecting” the secular nature of the state.

‘from the point of view of community relations, the fatwa was a disaster for the Muslims in Britain’ (Ruthven, 1991)

No one paused to inquire if book burning had the same meaning and significance in Islamic traditions, or whether the Bradford incident was largely symbolic, an expression of impatience rather than intolerance, and the result of misguided advice rather than hatred…all Muslims were implicated in the book burning (Parekh, 1990: 122).

‘The nature of the media coverage surrounding the ‘Rushdie Affair’ transformed the dominant view towards Muslims in Britain from Asians to Muslims.’ (Vertovec, 2002: 23)

From Racism to Islamophobia

Islam seen as a single monolithic bloc, static and unresponsive to new realities.

seen as separate and other – (a) not having any aims or values in common with other cultures (b) not affected by them (c) not influencing them.

Islam seen as violent, aggressive, threatening, supportive of terrorism, engaged in ‘a clash of civilisations’.

Islam seen as a political ideology, used for political or military advantage.

Criticisms made by Islam of ‘the West’ rejected out of hand

Discrimination defended   Hostility towards Islam used to justify discriminatory practices towards Muslims and exclusion of Muslims from mainstream society.

Relating to: Immigration, Assimilation, Cultural practices (veiling); Arising from the presence of Muslims within Western society

Holloway, Lester, Islamophobia – 20 years on, still a challenge for us all, Runnymede Trust, online, 13 April, 2016

Huntingdon, S (1996) The Clash of Civilizations and the Remaking of World Order. New York: Simon and Schuster.

Nachmani, Amikam (2010). Europe and its Muslim minorities: aspects of conflict, attempts at accord. Brighton: Sussex Academic.

Kundnani, Arun, 2014, The Muslims Are Coming! Islamophobia, Extremism, and the Domestic War on Terror, Verso.

Runnymede Trust, Islamophobia, A Challenge for Us All, 1997